There are very few plain laptop covers on the University of Georgia Athens campus. A range of colorful stickers and covers adorn computers in every classroom, study space and dorm.

Whether it’s to share their interests, promote programs and organizations, or simply because they think it makes their laptop cooler, student and faculty computers reflect the individual personalities of the campus community. 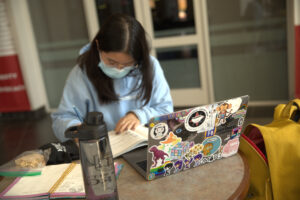 Emily Kim has covered her laptop with stickers that show her interests and connect with other students.

“Everyone has the same boring laptop. A lot of people have MacBooks so I like to put stickers on to show a certain personality and some people will recognize that and then a conversation will start. 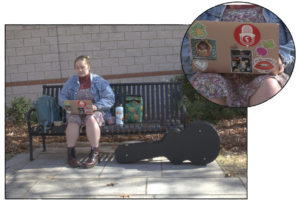 Kathleen Sullivan studies outside the Hugh Hodson School of Music with her stickers on full display, one being a cartoon beet. She loves vegetable, and it became a joke between her and her friends.

“Beets are my favorite vegetable and my friends laugh at me because nobody likes beets.” she said, “We saw this in a bookstore, and they all said I had to buy it. I guess it’s part of my personality now. 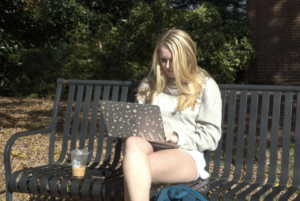 Students often post stickers of clubs or organizations they are involved with on campus. Mikaela Haast proudly displays her sorority letters.

“I love being in Tri Delta, so might as well represent it.” she says, “We’re such a big organization that it’s hard to know everyone. It’s nice whenever I’m on campus, or see someone with a sticker or a t-shirt and I don’t know her. I can say ‘Oh, I’m also a Tri-Delt.’ We usually know similar people, so it’s good to have this community. 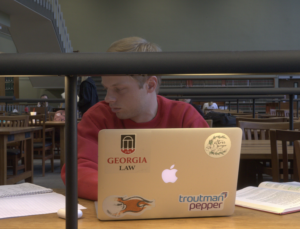 Philippe Chason BBA ’18 displays some of his favorite things on his computer, including Jittery Joe’s and Georgia Law.

Chason’s Jittery Joe sticker has been through a lot, but he’s determined to show his love for local Athens coffee.

“I actually replaced this one because it’s so worn out. So it’s the second one I’ve had there. 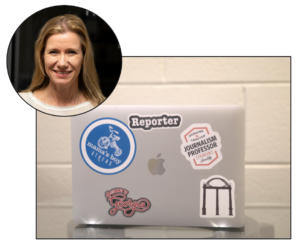 Lori Johnston’s personal and work notebooks are filled with stickers. She also gives stickers to students as a reward for success in her classes.

“We teachers have our stuff, and I want to be known for my stickers,” she says, “My thought was when I have my laptop open, what do they see? Because I want students to learn about me as I learn about them. 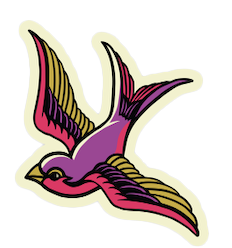 Johnston also enjoys seeing his students’ stickers and sees it as an opportunity to learn something new about them as well.

As a proud Double Dawg, Johnston displays several UGA-related stickers on her computer, but her bow sticker is her favorite.

“A lot of students have UGA-related stickers for departments or programs that I don’t know about. And so I can learn about this program, through them. It gives me an idea of ​​where students before and after my course.”

Do you have a collage of stickers on your computer? Submit a photo to [email protected] to show them off in our alumni notebook feature! (we may not be able to execute all submitted photos.)