“Can you please draw a chubby man with a beer belly for me? My dad had lymphoma and he was very skinny when he passed away in July. I miss him like he used to.” After seeing this request on his social media account, Chinese illustrator Luo Yuan used several simple strokes to draw a small cartoon of a chubby man holding a bright green shining star in his hands.

This simple sketch and many more like it have gone viral on social media in recent months as many netizens have written to Luo asking him to do custom designs for them.

The drawings first began in May 2021, shortly after the death of Chinese scientist Yuan Longping, the country’s “father of hybrid rice”, from illness. On a whim, Luo drew a cute cartoon figure of an elderly man standing among seedlings in a paddy field, holding a bowl of rice in one hand and a glowing green star in the other, to express his grief. and say goodbye to this great man. .

This Gen Z artist’s unique and simple idea quickly went viral on Chinese social media, and soon Luo was receiving requests from netizens every day. Over the past year, the artist has drawn over 1,000 of these cartoon characters.

For this young illustrator, this situation imposed itself “naturally”.

“After people saw my work, they started leaving messages in the comments asking me if I could draw pictures of their close relatives or friends that they had deep longings or hopes for. I thought these stories were quite special, so I accepted.” Luo told the Global Times.

Working as a designer and illustrator during the day, Luo spends his free time at night and on weekends drawing these characters. Usually he uses a needlepoint pen to create an outline of the character, then fills in the stars with a highlighter.

Born in a seaside town in Guangdong Province, southern China, Luo fell in love with drawing since childhood. He got into the habit of drawing little cartoon characters when he was in college, which stuck with him to this day.

Among the countless messages received every day on various platforms, most were about the love of grandchildren for their elders.

“In China, there is always a special bond between grandparents and their grandchildren,” he noted.

Next come requests for drawings from people struggling with the disease.

For Luo, reading comments about her work is like reading a life book that covers everything from parents you haven’t seen in a long time to friends tortured by illness.

“Stories contain all facets of life in this world,” he said.

Luo gave an example of a memorable message he saw in the comments, “One of a couple in a long distance relationship, who also suffered from depression, left the message.”

So Luo drew a couple holding the shining star together in the hope that the two could meet soon and overcome this difficulty together.

In another example, Luo was asked to draw an elderly man holding a cat and a star.

“Before he died, this person’s grandfather wanted a cat to ward off loneliness. Yet he died of a stroke before the kitten even reached adulthood.”

According to Luo, his choice of subject does not depend on the sadness of the story. “There are no fixed criteria because I am truly moved by each story because they are all immeasurable.”

“It’s sad to see so many people struggling in their lives. The only thing I hope is that I can bring some warmth to those who are now living rather miserable lives and I hope that they can overcome it as soon as possible.” Luo added.

Talking about his next goal, Luo said it was quite simple. “After 1,000, my next goal is 10,000. And I will do that as long as there are comments on my social media channel.” 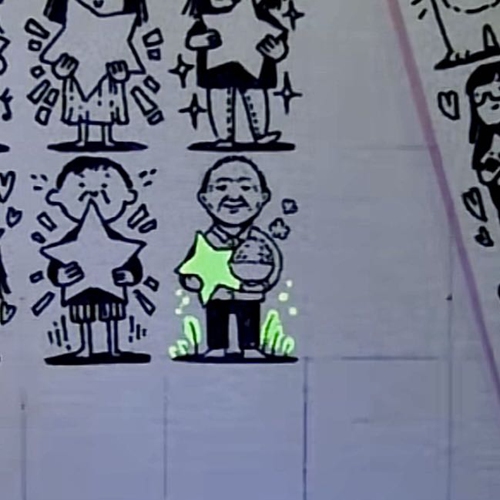