User Interface
Home›User Interface›Apple has been granted a patent for an advanced ring accessory system that provides cursor, paint, pencil and trackpad modes

Apple has been granted a patent for an advanced ring accessory system that provides cursor, paint, pencil and trackpad modes

Today the U.S. Patent and Trademark Office published an Apple-issued patent for an advanced smart ringer system that could work with an iMac, MacBook, or iPad, especially an iPad Pro when docked to a smart keyboard. The ring operates in four modes covering cursor movement, brush, pencil, and touchpad modes.

A cuboid or cylindrical housing of an assembly may define a hollow passageway in which one finger of a user’s hand may be positioned to wear the assembly, while other fingers of the hand may provide tactile inputs of user to various touch sensor input components disposed on an exterior of the housing around the passageway.

For example, one or more electromechanical switches and one or more touchpads may be provided at different portions of a periphery extending around the hollow passage of the assembly, and the different sensors may simultaneously detect different inputs from different fingers of the assembly. user, while the sensed signal from the inputs may be used to generate control data for controlling a user interface of an electronic device that may be communicatively coupled (eg, wirelessly) to the input assembly .

Any suitable motion sensor may also be provided by the input assembly to determine movement (e.g., translation and/or rotation) of the input assembly housing in three-dimensional space, and such Motion can be used in combination with any combination of touch sensed sensor inputs to control the electronic device user interface.

Apple’s patent FIGS. Figures 3A and 3B below illustrate the top and bottom right side perspective of one style finger device. The numbers show that the ring could be recharged (wired or wireless); FIG. 6 is a flowchart of illustrative methods of using an input assembly (ring) to drive an electronic device (iMac, MacBook+). FIGS. Figures 4A and 4B illustrate other forms of annular device. 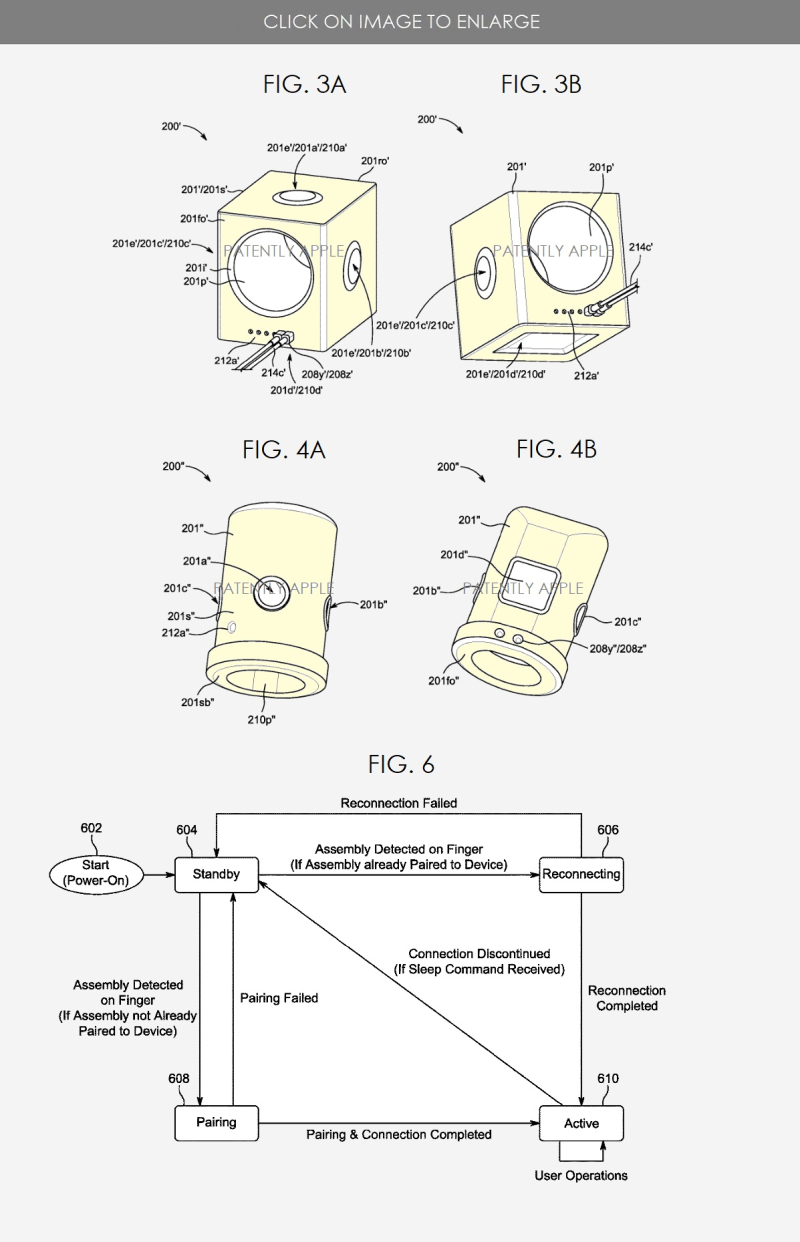 The second type of functionality of operation 508c may include a type of brush functionality, which may include being operative to generate a brush cursor type of control data (e.g., to control cursor #112c on screen # 112s in a second way as if the input set were a brush input tool), where, for example, a motion sensor circuit of the input set can operate to detect any movement of the set of entry into a three-dimensional space.

The third type of functionality of operation 508d may include a pen functionality type, which may include being operative to generate a pen cursor type of control data (e.g., to control cursor #112c on screen #112s d ‘a third way as if the input set is a pencil input tool